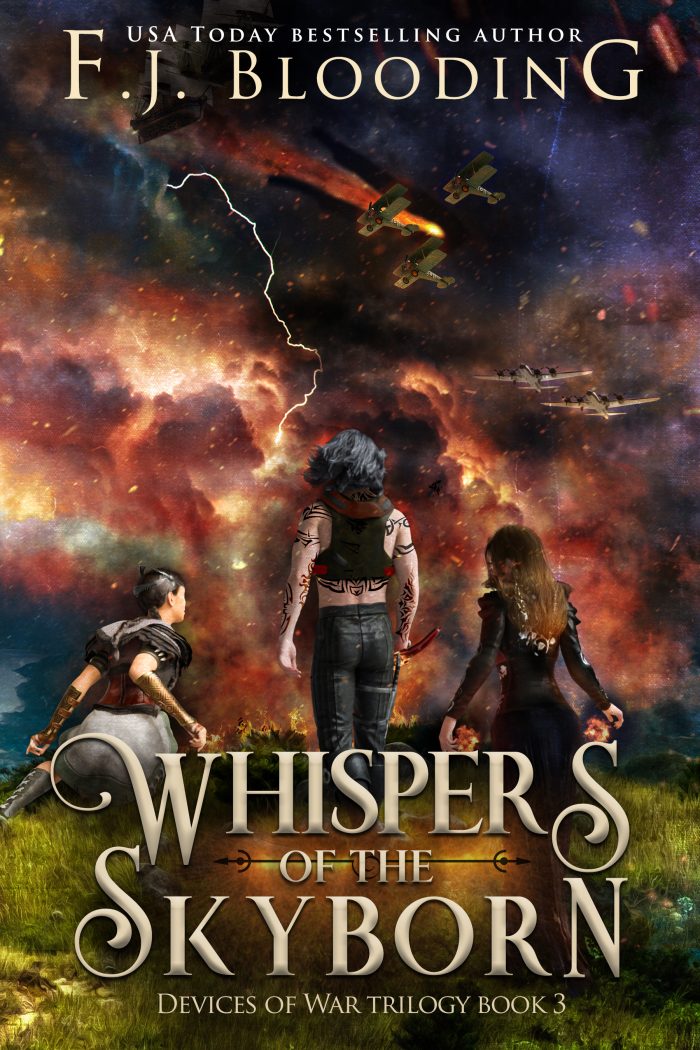 Whispers of the Skyborne

Nix isn’t our biggest foe. And now, we have a name.

We have a new government, and for a little bit, I can disappear and rebuild. I’m recovering after the events of the Sky Games. I have a new design for my ships. Faster. Larger. More versatile.

But our enemy isn’t who we thought they are. It isn’t Nix and her Hands of Tarot. She’s in custody, under my control. But the war is still ongoing. Factions of the tribal Great Families have broken off in search of the only metal deposits left on our moon, and they don’t care who gets in their way. They’re the purebloods with the greatest Marks.

The Marks of power we hold such pride in will be our undoing. They’re not a gift to be praised. They’re an invasion, the first wave. The Skyborne are desperate for supplies to rebuild their starships. Our Marks are their only way of controlling us to provide for them.

But when they have what they need, it may be the end of everything we know.

The Devices of War trilogy started as a challenge. I needed to write something different right after I'd brutally failed almost an entire cast of characters in another series.

This is by far one of my favorite worlds. I love how the people live with the world. This series will always be dear to me.

Synn was a difficult character to get to know. On the outside, he's reserved so trying to write his character in the third person point of view was nearly impossible for me. The first, I don't know, eight drafts were just thrown out because they sucked so terribly.

I didn't get Synn's character until I dipped into first person.

My favorite part about writing this book in particular was developing the new ships and the new technology. I spent hours and days researching how planes were designed originally. There are some neat, neat books on this. If you're ever bored sometime and wanting to learn something fun or new, research how planes were first designed. That's a fun research project you'll enjoy.

Welcome aboard! You are about to immerse yourself into the world of steampunk adventures and unique fantasy world building; sail the ships through expanse of cool, windy skies, and dive deep into the blue oceans where whole cities have flourished.

Technology galore and exciting modalities...characters to love and excitement that addicts. Absolutely want to fly with this family all the way.

As soon as I saw the cover I HAD to read it. I haven't read too much steampunk but what I have I loved. I have to say this world the author created is even better than any other steampunk I have read. Fall of Sky City is an - I can't put this down, action packed read.